A man from West Africa told me that he had visited a busy food market. Many of the traders are women and they carry the food in pots, baskets, and other containers that are balanced on their heads. Some even ‘ride pillion’ on motorbikes with containers on their heads. Having bought their food his group walked through the urban bush to a nearby celebration. He and a friend brought up the rear. Ahead moved a column of straight-backed women with pots of food on their heads.

A Yellow-billed Kite drifted lazily above the women. Suddenly its tail twisted and with partly folded wings plummeted in an angled dive right into one of the containers. An instant later it rose up and out, a morsel of food clenched in its talons. Sweeping up to its previous height it turned and drifted away. The woman beneath the pot checked her stride slightly – a hand rose and steadied her load. She glanced around and then walked on, unaware that she had been robbed. 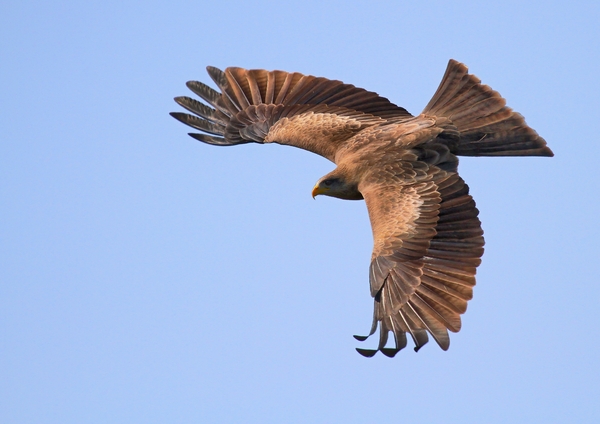 A Yellow Billed Kite About To Dive

Since then I have heard similar stories, mostly from West Africa. The descriptions are remarkably alike. Usually, it happens in a busy food market and meat of some sort is snatched from inside a pot on a woman’s head. Initially, I thought that it might be an urban legend, but still I longed to see it.

I was fascinated, and from that moment on whenever I saw a Yellow-billed Kite, I followed it, hoping that it would repeat something similar. I saw numerous kites and marveled at their aerial ability, particularly the flexibility of their tails. However, the only robbing or pirating that I saw was when they stole a lizard from a Dark Chanting Goshawk and later a small bird from a Wahlberg’s Eagle. I also saw them catch numerous insects and transfer them from their feet into their mouths.

Then one day while playing soccer at Londolozi Game Reserve our wing somehow disturbed a lizard which sprinted onto the field and then began to dodge the various players that it encountered. I stopped to watch its zig-zag dash when a kite plummeted vertically out of the sky, snatched the reptile from amongst the players and flew off. It was over in a few seconds. Bad for the lizard, but remarkable flying. It saw food, plummeted, grabbed it, and was gone.

Later I was staying at a lodge in Hwange Game Reserve, Zimbabwe. Breakfast was served under thatched gazebos overlooking a dry river bed. You fetched your food at a central kitchen and then walked to a nearby shelter to eat. I was second in line. The man in front of me, chose a ‘full house’ breakfast; two fried eggs, toast, bacon, beans, and two pork sausages. As he turned to move away, the chef advised him to cover his food with a ‘cloche’.

He was a bit irritated and asked, “What for?”

The chef pointing upwards, said, “The birds will steal your food”.

Dismissing this advice with a shrug, he scoffed, “Birds! Are you smoking something?”

I stepped back, out from under the thatch and looked up. A brief glance yielded three kites, wheeling and circling above us. ‘Smoking something’ then turned and walked off. Ten steps later the first kite dropped. It came from above and behind, slipped over his left shoulder, snatched a sausage and was gone. He did not grasp what had had happened. As he stared at his wobbling plate a second kite dropped, slipped over his same left shoulder and snatched the second sausage. It was amazing! Two sausages snatched and the breakfast plate was still in his hand.

I walked over and inspected his plate. The only change was that some of the beans had invaded the egg section, and there were some skid marks through the orange sauce.

I could not resist it. I too refused the ‘cloche’ and walked into the open. I counted my paces, I got to fifteen, when I heard a muted ‘whoosh’, some feathers brushed my left ear and one sausage was gone. My plate looked the same, skid marks through the bean sauce. Another ten paces and my second sausage was took flight.

A young German woman started videoing the heists. Eventually, I was playing the model, placing sausages on the top of my head for a more dramatic sequence. It was incredible! The kites always came from behind in a steep stoop. I could feel them take the sausage, but there was no bump, no scratch, no warning, no pain, just the touch of a feather and the sausage was gone.

Hear what 702’s John Robbie has to say about Ian