The ‘Bushman Trail’ is situated in the south-western corner of the Kruger National Park. A typical walk moves through grassy valleys that are flanked by rolling hills. The crests of these hills are crowned by piles of massive, rounded, blocky, boulders. It is difficult to walk at any pace here as you are tempted to stop and search these huge granite rockeries with your binoculars. They appear to be the perfect hangout for Klipspringers, Chacma Baboons, and Leopards. If you look carefully you will see the first two. Leopards are more elusive. However, even if you do not see them, the setting creates an expectation that the cat lives here and will appear at any moment.

Two Crowned Lapwing eggs lying on a bed of gravel. Note short grass next to nest.

If you had walked these paths a long time ago, centuries ago, you may have seen bands of diminutive hunters and gatherers – the people who gave this trail its name. Sadly, they have gone and all that remains is their art, their ‘images of power’ painted on the more protected rock faces.

The trees that grow here are also spectacular. The stand-out being the Large-leaved Rock Fig, Ficus abutilifolia. This tree grows on the rock faces, where its pale, almost white roots snake along the surface and creep into crevices searching for water and nutrients.

After tea and coffee, we left the camp early and had been walking for around three hours when we saw a large tree in the distance. The group stopped and there was a lively discussion about its name. Being about 300 meters away and the only way to see any detail was to use binoculars.

I decided to take a photograph of it as it is always useful to have a record and sometimes it is possible to see some detail on a good computer screen. I climbed on a large boulder that was next to the path in order to gain a vantage point for the photograph. On top of the boulder there was an indentation, a small rectangular hollow of around  42cm x 19cm.

In the hollow was the most stunning collection of bones!

Scattered among these were rodent jaws. Long curved rodent incisors whose distinguishing feature is an angled gnawing edge. There were some tiny skulls and a small, spinal vertebra with a long spinous process. A few scorpion pincer fingers or pedipalp fingers were visible. There were numerous pieces of insect exoskeletons one with a iridescent green sheen, similar to that of a small dung beetle that I had once seen. There were also many other small bones that were difficult to identify. Most of the bones were broken and appeared to have been shattered – rather than chewed as there were no teeth marks on them.

Nicol Coetsee, our guide, came and had a look. His initial reaction was that it might be the remains of owl pellets. However, I had never seen anything like this before and decided to investigate what predator had killed these animals and left their remains in this amazing midden. A midden is a term used by biologists to describe any kind of feature that contains animal waste products.

I sent two photographs of the scorpion pedipalp fingers to Jonathan Leeming who is a scorpion expert. Each scorpion species has unique pedipalp fingers that differ from one another in texture and shape. This enabled him to identify the scorpion as a Rock Creeping scorpion or Opistacanthus leavipes a species that is common in rocky outcrops in the southern Kruger National Park. He was even able to say that one of the pedipalp fingers belonged to a male and the other to a female. This deduction was based on a male’s fingers having a distinctive lobe near the base, whereas the female’s does not. Of significance was that this species of scorpion is nocturnal, and so its predator, the creator of the midden, is at least partly nocturnal. Jonathan added that it is usual to see more male than female remains. This is because at times the males leave their burrows to search for females in order to mate, and are therefore more prone to predation.

In Wayne Lynch’s book ‘The Owls of the United States and Canada’ he writes, “Hungry owls also prey on scorpions, which are potentially deadly. These dangerous vertebrates have been recorded in the diets of Whiskered Screech, Eastern Screech, Burrowing, and Flammulated owls. The greatest scorpion killer of all is the tiny Elf Owl, perhaps because many of these owls live in the desert where scorpions are most plentiful and diverse.

‘all the scorpions had the stinger removed’

David Ligon reported that adult Elf Owls readily ate scorpions and also fed them to their young. He found four scorpions in the stomach of a single owl, and all the scorpions had the stinger removed.

The venomous stinger of a scorpion is located on its last abdominal segment, so by removing this, the owl essentially disarms the animal. Ligon also found scorpions stockpiled in nest cavities. They also had their stingers removed, suggesting that this disarmament strategy was common”. The Rock Creeping scorpion or Opistacanthus leavipes is not very poisonous. It would be interesting to know if this ‘stinger removal’ occurs when Southern African owls catch scorpions.

I spoke with Geoffrey Lockwood who has extensive knowledge of owls in general and a wonderfully intimate understanding of the Spotted Eagle- Owls that live in Delta park, Johannesburg. The owls here nest in a box on the roof of the building in which Geoff lives. He cleaned out all the pellet remains from last year’s breeding season and we compared this to the collection of bones from the Bushman Trail. The similarities were obvious. Many of the bones from Delta Park were broken and appeared to have been shattered, not chewed. Most of them were of a similar size, but a few that came from an African Wattled Lapwing, Vanillus senegallus were larger. There were rodent jawbones, some of which we know come from the Vlei rat, Otomys irrodatus. There were similar long rodent incisors; there were similar small vertebra. And even though the photograph of the Delta Park nest bones does not show any insect exoskeletons, we did find the remains of beetles and ‘parktown prawns’ or Libanisidus vittatus in pellets found near this nest site. 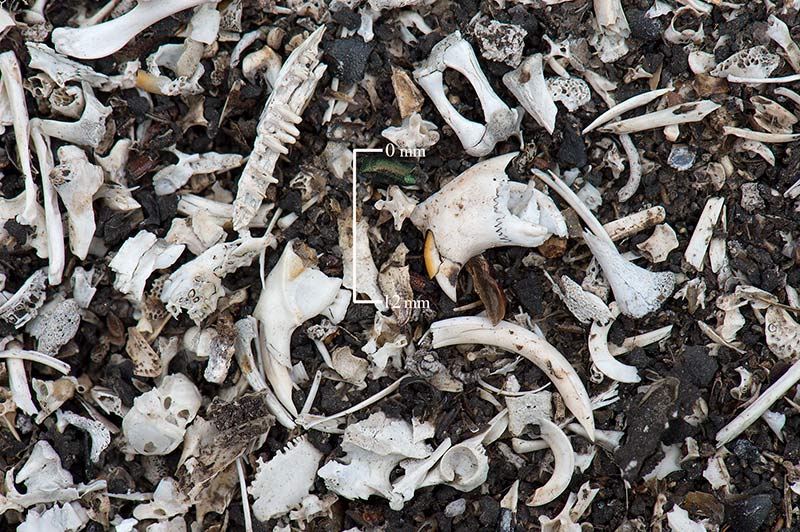 Why are the bones broken?

Geoff has witnessed the adult Spotted Eagle-owls feeding their chicks. In most cases when the male bird brings prey items to the nest, he has already decapitated and swallowed the head. The female then tears the remainder into smaller pieces and feeds them to the chicks. This tearing action may cause bones to break or shatter.

There is also a possibility that some bones are crushed when passing through the digestive tract of the chicks. When the swallowed food enters the ventriculus or muscular stomach it is subjected to powerful muscular grinding which may shatter some of the more fragile bones. This grinding action helps to separate the digestible from the indigestible materials.

I found the midden in August. Nicol returned later the same year and inspected and photographed it. It looked similar, but on one side there was a small collection of intact seeds from the Bluebush or Diospryos lycoides. He told me that this small tree had recently fruited and that many animals had eaten them, including himself. Civets, Jackals, and Baboons all eat these fruits and whole seeds are voided in their scats. The most likely explanation, taking into account that the ‘midden’ is on top of a large boulder, is that a Chacma Baboon ate the fruits, climbed onto the boulder and left some scat there. Rain, sun, wind and insects then disintegrated the softer parts of the scat leaving the seeds behind.

The evidence that we have gathered indicates that it is likely that the midden on top of the rock on the Bushmen Trail in the Kruger National Park was created by a collection of owl pellets that have disintegrated over time. I believe that the creator of this amazing midden is most probably a Spotted Eagle-Owl. To be more specific, the midden could have been created in three ways. An old nest. A feeding site i.e. where the chicks moved to after leaving the nest and were still being fed by the adults. A favourite owl perch i.e. a place where an adult owl regurgitates pellets after leaving its day roost.

A long time ago someone said, “Just ask and you will be amazed at the help that you get.” Everyone that I contacted offered their time and knowledge and were excited to be involved. This has been a fascinating project and illustrates the power of collaborating with knowledgable people to solve a tracking puzzle. The people that assisted me are listed under references.

If anyone has any information that will add to our knowledge of this type of midden I would welcome it.

Geoffrey Lockwood is an ornithologist with a particular interest in owls and is the resident ecologist at Delta Park in Johannesburg.

Books: The Owls of the United States and Canada by Wayne Lynch.

Photographic credits: All photographs by Ian Thomas except image of ‘scorpion stinger’ on page 7 which was taken by Jonathan Leeming.

Hear what 702’s John Robbie has to say about Ian